Home » After They Go To Court, I Will ‘Expose’ Their Ignorance On Proceedings- Osei Kyei Mensah

The Majority Leader, Honorable Osei Kyei Mensah Bonsu, has dared the Minority leader to go to court as he had earlier announced if indeed he is a man. According to Osei Kyei Mensah Bonsu, once the minority go to court, he will expose the minority. The Majority Leader revealed, in an interview on Okay FM, that after the minority leader left, some of his members returned meaning that some of the NDC MPs were present to form the voting quorum. 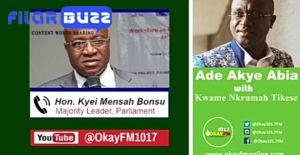 “When the question was put, you were in the chamber. Even when they had staged a walkout, their members occasionally came back to pick up what they had left. At any material time, I can say they were present. Your presence in the room counts that you are part. I do not want to drop some of the secrets here on the radio.

If you are a man, go to court and I will expose them of their ignorance of parliamentary proceedings.

If indeed our victory is short-lived, go to the court.”, he explained.