Home » Black Stars Of Ghana Qualify For 2022 FIFA World Cup In Qatar After Drawing In Nigeria.

Black Stars  have a World Cup ticket after playing a 1 – 1 draw with Super Green Eagles of Nigeria in Abuja. Coach Otto Addo and his lads got an early goal but was canceled out by Nigeria. Ghana managed to endure the pressure as events ended with a goal apiece.

The Super Green Eagles of Nigeria and Black Stars came in full force from the start of the game. In the 3rd minutes, Abdul Fatawu Issahaku was set up but he was dispossessed.

Nigeria came into the game with quick passes but Daniel Amartey and Alexander Djiku were on duty to prevent ball from going through. 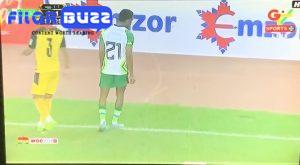 Black Stars capitalized on a dead ball to break the deadlock through captain Thomas Partey in the 10th minutes. The Arsenal midfielder was purposeful to shoot a short corner kick which passed through the hands of goalkeeper Francis Udoho.

As they trail by a lone goal, Victor Osimhen and his colleagues upfront tried to even the scores for Nigeria.

Nigeria kept their composure in search of space to equalize and it paved way in the 20th minutes. Upon a VAR review, referee awarded a penalty to Ademola Lookman which was expertly converted by skipper Troost Ekon. Minutes later, Victor Osimhen had a good run over Daniel Amartey which resulted in a free kick at the edge of the box, but the opportunity was blown apart. 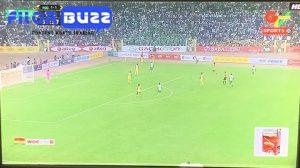 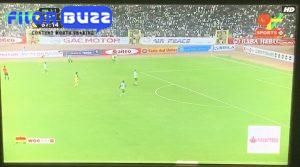 Ghana was saved by another VAR Review after Victor Osimhen had beaten Daniel Amartey and Alexander Djiku to score. Referee – upon VAR interaction – ruled the ball offside as Victor Osimhen was adjudged to have moved beyond the line.

Goalkeeper Joseph Wallocot saved another ball from entering the net in the 45th minutes, when Victor Osimhen directed a ball at goal.

In the 58th minutes, Victor Osimhen made an attempt at goal via a bicycle kick but it soared high.

At the half hour mark, Ghana and Nigeria kept the score at goal apiece.

In the 70th minutes, goalkeeper Joseph Wallocot came to the rescue of Ghana as he challenged for a ball which could have made its way into the net.

With six minutes to end proceedings, the score stayed 1 – 1.