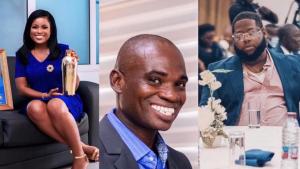 Check Out A List of 13 Ghanaian Celebs And Politicians Who Received The Fake UN Awards. Social media is presently on fire after an alleged scammer identified as Kwame Owusu Fodjour pulled off the biggest stunt in the history of Ghana by holding and awarding fake awards to heavyweights in the entertainment industry and some politicians in Ghana.

The now infamous ceremony took place on August 28, 2020, which saw Ghanaian personalities being honoured for their accomplishments in their various fields of endeavour. Among the persons who rewarded were NPP’s firebrand, Benjamin Antwi Bosiako alias Wontumi, rapper Sarkodie, Daughter of Glorious Jesus, Berla Mundi and DJ Black.

The fake award scheme was dubbed Global Leadership Service to Humanity Awards but apparently everything was fake as the UN has no hand in it. The awardees were presented with plaques of “UN Kofi Annan Excellence Awards” which drew a link between the scheme, the UN, and the late Kofi Annan.

These personalities proudly took photos of their awards and posted them on their various social media handles, a situation that has exposed how obsessed Ghanaians are with awards.

We really need to do a thread of all victims of the fraudulent scheme by Kwame Fordjour.

The fact that he gave Chairman Wontumi, a galamsey operator, an award for sustainable development still cracks me up.

Ghanaians have taken to social media to heavily troll the recipients of the awards especially Sarkodie after the lid was blown off. Check out a list of the 13 personalities who fell victim to the scam.