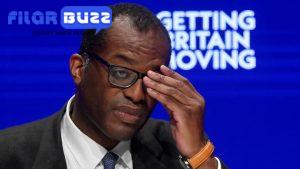 Kwasi Kwarteng, on Friday, October 14, 2022, became the second shortest UK Chancellor in history The Ghanaian-born British was sacked after less than 40 days as the UK’s Finance Minister Shortly after his dismissal, former Health Secretary Jeremy Hunt was appointed in his stead PAY ATTENTION: Сheck out news that is picked exactly for YOU ➡️ find “Recommended for you” block on the home page and enjoy! Ghanaian-born British Kwasi Kwarteng has been sacked from his position as the Chancellor (Finance Minister) of the United Kingdom. The sacking of Mr. Kwarteng makes him the second-shortest UK Chancellor on record after Iain Macleod died of a heart attack 30 days after taking the job in 1970.

Kwarteng, who was in charge of the UK’s finances, was relieved after less than four months. This follows days of speculation that the British Prime Minister, Liz Truss, will announce a U-turn on parts of the mini-budget.

The value of the pound sterling fell sharply in the past half an hour after the dismissal of Kwarteng as it traded below $1.12, which was 1.3% lower than it was. In reaction to his sacking, Kwasi Kwarteng has wished Prime Minister Liz Truss well with her plans for the economy and highlighted their close friendship over the years.

In a statement released shortly after the dismissal, Kwarteng acknowledged the market turbulence inflicted on the UK following his mini-budget. He added that the economic environment had changed rapidly since he unveiled his ambitious plans comprising £45 billion in tax cuts funded by government borrowing. I Took On Chancellor Job Knowing Full Well The Challenging Times We Are In – Kwasi Kwarteng Kwarteng says he took on the job “in full knowledge that the situation we faced was incredibly difficult.

UK Prime Minister Liz Truss and Kwasi Kwarteng are old friends from the same wing of the Conservative Party. What they have attempted in policy terms is at the core of their outlook on politics. Shortly after the dismissal of Kwasi Kwarteng, a former Health Secretary of the UK, Jeremy Hunt was appointed the Chancellor of the Exchequer. The 47-year-old Kwasi Kwarteng took over as head of the British Treasury in September 2022 after the new UK Prime Minister, Liz Truss, was elected. He was tasked with trying to pull the UK out of a serious cost-of-living crisis without plunging the public finances into the abyss. Kwasi Kwarteng: Meet UK’s New Finance Minister Whose Parents Are Ghanaians Kwasi Kwarteng was born in East London in 1975, but his parents arrived in the European country from Ghana as students in the 1960s. Born Akwasi Addo Alfred Kwarteng, he is the only child of Alfred K. Kwarteng, an economist, and Charlotte Boaitey-Kwarteng, a barrister. Although he was born on a Monday, his parents named him Kwasi, the Akan name for a Sunday born. New feature: Сheck out news that is picked for YOU ➡️ find “Recommended for you” block on the home page and enjoy!