Home » Photo: President Akufo-Addo Releases The List Of Appointees To His Office For His Second Term

We earlier reported that His Excellency, President Akufo-Addo has collapsed all the 7 specialized ministries he created in his term back in 2017. These ministries were Ministries of Inner-City and Zongo Development, Regional Reorganization and Development and Planning, Business Development, just to mention a few.

A source close to Asaase Radio indicated that, the above mentioned ministries are being collapsed the President Nana Akufo-Addo because they achieved the purpose for which it was set up. A report which has also been filed on Asaaseradio.com indicates that the number of ministers in Akufo-Addo’s second term is expected to decrease by “30% at least.

In a latest press release dated January 19th 2021, shows the list of appointees made by President Akufo-Addo to his office for his second term. So far, 13 names have been released so far with immediate effect. The press release also stated that the appointees are to undertake their duties in acting capacities, subject to consultation with the yet-to-be constituted Council of State.

Checkout the photo below; 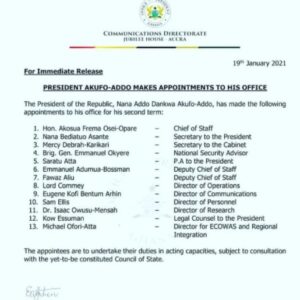