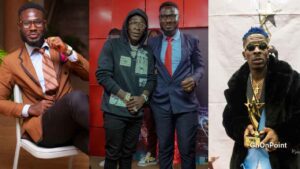 Dancehall ‘Commando’ Shatta Wale has praised Mc PORTFOLIO, one of the key members who have since the ince

ption of the trend ‘Kumerica’ contributed greatly to keeping it alive.

The social media craze ‘Kumerica’ which started off by some people from Kumasi, the capital city of Ashanti Region has now transcended across the country.

It can be said without any further debate that Kumerica has done more good than harm and its’ more solid, unlike others that have come before.

In a video sighted by Filarbuzz.com, Shatta Wale recognised the effort and crucial role of the event host & TV star Mc PORTFOLIO who is as the P.R.O of Kumerica.

Watch the video below;