Details: KNUST Unveils Official 70th Anniversary Cloth. As part of the 70th Anniversary of the Best tertiary institution in Ghana and West Africa, the KWAME NKRUMAH UNIVERSITY OF SCIENCE AND TECHNOLOGY (KNUST) have presented to us the ultimate “Ntoma” reserved to be rocked by all during the grand celebration to mark 70 years of the pride of West Africa and the epitome of African technological studies. 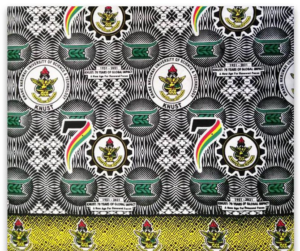 The KWAME NKRUMAH UNIVERSITY OF SCIENCE AND TECHNOLOGY (KNUST) is a public university established in the country, Ghana as well as the largest university in the Kumasi Metropolis in the Ashanti Region. KNUST has its roots in the plans of King Asantehene Agyeman Prempeh I to establish a university in Kumasi as part of his drive towards the modernization of his Ashanti kingdom. This plan never came to fruition due to the clash between British empire expansion and the desire for King Prempeh I to preserve his Ashanti kingdom’s independence.

However, his younger brother and successor, King Asantehene Agyeman Prempeh II, upon ascending to the Golden Stool in 1935, continued with this vision. Events on the Gold Coast in the 1940s played into his hands. First, there was the establishment of the University College of the Gold Coast. Secondly, there were the 1948 Accra riots and the consequent Watson Commission report which recommended that a university of sciences be established in Kumasi. Thus, in 1949, the dream of the Prempehs became a reality when the building started on what was to be called the Kumasi College of Technology.

The Kumasi College of Technology offered admission to its first students to the Engineering faculty in 1951 (they entered in 1952), and an Act of Parliament gave the university its legal basis as the Kumasi College of Technology in 1952. The nucleus of the college was formed from 200 teacher training students transferred from Achimota College in the Greater Accra Region. The college was affiliated with the University of London. In 1961, the college was granted full university status.

The university covers a total land area of 2512.96 acres. The main campus which is about seven square miles in the area is about eight miles (13 km) to the east of Kumasi, the Ashanti Regional capital.

We are in the year 2021 and the University will be marking its 70th anniversary in style with a host of ceremonies lined up and yet to be publicly announced but the official cloth for all the merry-making is already out for everyone to get a yard or two for themselves.

This announcement was made via the official Twitter handle of the KNUST Students Representative Council on the 7th of July. Details that came with the announcement included the price as well as where and how to get yourself a couple of yards to rock in your own humble fashion sense. The cloth will be offered to buyers at Ghc22 per yard and can be purchased right from the University Relations Office(URO) or arrangements can be made for orders via 0245171989. All further details and inquiries can be made through a call with the number enlisted in the tweet (Stancie – 0245171989). 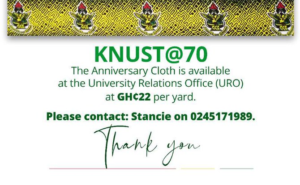