Guy Arrested For Attempting To Rape Female Inside  Queens Hall, KNUST Ladies Bathroom. Reports coming in indicate that one gentleman got himself into messy trouble after he was arrested for attempting to rape a female resident of Queens Hall, KNUST. 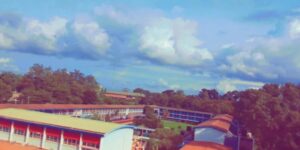 The incident which happened somewhere around Thursday evening was calmly handled to avoid the public spotlight. Per our investigation, the gentleman whose identity is well concealed broke into the bathrooms of the west wing of the hall which is mainly occupied by the ladies, and attempted to do whatever he went there to do.

An eyewitness account clarified that there was one lady inside when the said gentleman broke in. Screams were heard and so people had to rush in there to find out what was going on. The lady had to cover herself with her towel and run for her safety as the said guy held his Manhood in his hand and stood there.

Even though we can’t deny his attempted rape, the scenes people were greeted with when they run to rescue whoever screaming was something confusing and complicated. The guy just stood there with his Manhood in his hand without even flinching at the sight of people coming at him. He was restrained by security personnel and dragged where he humbly belongs for such misconduct.

The question still remains on what exactly he went to do there. He seemed harmless when they pounced on him as if he had no intentions of rape. As of now, we are monitoring the situation as investigations proceed.