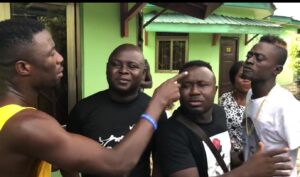 VIDEO: Kwaku Manu and Lil Win clash over who’s more handsome. Sunsum Ahuofe was on the receiving end when fellow Kumawood actors, Kwadwo Nksansah ‘Lil Win’ and Kwaku Manu, clashed over who is more handsome. Considered as one of the ‘scariest’ actors in Kumawood due to his ‘big eyeballs,’ Sunsum has often been compared to highlife music star Patapaa and Kumwood comic actors Lil Win and Ras Nene when it comes to ‘beauty contest.’

Sunsum has occasionally rated himself above Patapaa and Lil Win but he received ‘stray bullets’ when Kwaku Manu and Lil Win clashed in a hot argument over who is more handsome.

“I’m only praising you because you have been invited among ‘humans’ (literally, handsome people),” Kwaku Many said in a viral video where he is seen arguing with Lil Win and Sunsum.

“Your competitors are Patapaa, Ras Nene, Sunsum, and Fum Yaa. I’m not your mate, I’ve given you a gap,” he added.

During the argument, Sunsum decided to join and pulled the complexion card but he was brushed aside and heavily roasted for looking ugly.

OTHER STORIES: Ghanaian man in Turkey shockingly discovers how guns are smuggled to Ghana

Bring back OV before depression kills her – Ruthy pleads with Stonebwoy