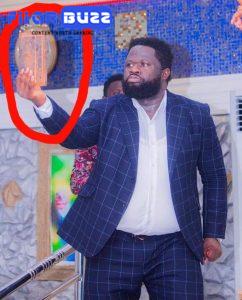 Speaking in an exclusive interview on Kessben FM and radio, Prophet Ogya Nyame who predicted defeat for the Ghana Black stars has made a quick U-turn. He also made some interesting clarifications.

” Let me clarify this once and for all. When I prophesied about Black Stars Defeat, I showed a ritual which could overturn the defeat. Do you remember?” Ogya Nyame asked the Kessben TV presenter.

” Yes, I remember vividly. You told the leadership of the Black Stars to bury a cow” The presenter replied.

” Very good. Let me put it on record that the defeat was pending with nobody attempting to perform the ritual. I personally sacrificed to bury the cow so that the Black Stars could qualify. Indeed, it worked. I should be given credit for helping the Black Stars win than the way people are attacking me ” Prophet Ogya Nyame added.

Few days ago, this Prophet has come under serious criticism after his defeat prophesy for the Ghana Black Stars failed. Now he is claiming their victory as a result of his prayer and sacrifice for the team.

You can click on the link below watch the short interview.